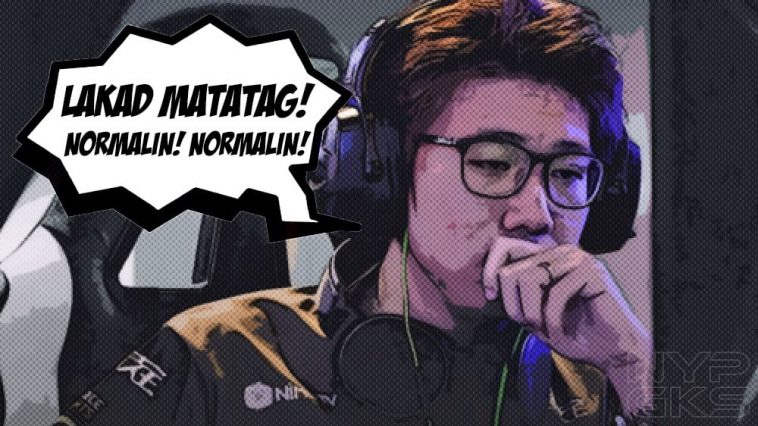 About to play with some Pinoy gamers? Play badly in a multiplayer match, and you’ll be accused of being a noob. Play well, and you’ll be part of a gaming group/clan in no time. But skill is just one factor, you need to communicate well with the team too.

If you want to get into the Pinoy gaming scene, you should know the unique terms gamers use to talk and chat. Here are some slang words and terms you need to know about.

Amp is used to convey one’s anger, disappointment or frustration

It is an abbreviation of amputa, which itself is short for “ang puta”, a Tagalog expression used to refer to someone as a bitch or whore.

Abbreviating a curse word was often done in online games in order to bypass mature chat filters that would automatically replace or censor predefined or known curse words.

A player doing a comsat in a LAN gaming session basically means he is snooping on enemies and learning their whereabouts by simply looking at their monitors, thereby gaining an unfair tactical advantage.

The term was prominently used when the original real-time strategy Starcraft and Counter Strike were popular. Back then, online multiplayer was not yet the norm in the Philippines, and most Pinoy gamers had to be in the same local Internet cafe to be in the same multiplayer match. While maphacks, speed hacks and bots are the common tools today, cheating in the past was simpler.

Comsat is also the combined abbreviation of communications satellite, which is an auxiliary structure in Starcraft that gives the controlling player a legitimate ability to scan a map area and reveal any units there, including hidden and cloaked units.

Geh or ge means sige, which means yes or okay in English. Pinoys use it to indicate assent, affirmation or agreement.

An intro boy refers to a gamer who takes great interest in a game, especially a newly launched popular title, but only for a short time so as to perhaps move on and jump on another bandwagon.

The term can also refer to a gamer who performs well at the start of a match but becomes a detriment to the group in the late-game period.

Dota 2’s ranged hero Mirana is perhaps most known for her Sacred Arrow, a skill that can be fired from a very long distance and stuns and damages the first enemy it hits. When a player says Jumong in the game, he’s basically referring to Mirana or her arrow skill.

Back when Dota as a Warcraft 3 mod started to gain ground in Pinoy LAN gaming, there was a Korean historical drama series entitled Jumong that aired on GMA Network. In the show, the eponymous protagonist was quite a prodigy in archery, and that’s why for Dota gamers his name became synonymous with Mirana.

The catchphrase was memefied by Filipino shoutcaster Marlon “Lon” Marcelo. He was commentating on the third game of a Dota 2 tournament match between teams Fnatic and Team Secret.

The phrase was a notable meme of 2018, so much so that Valve co-founder Gabe Newell used it in his welcoming remarks for The International 2018. It also became a special audio line that Dota 2 players could include in their chat wheels.

Makati means that a certain character (either a teammate or opponent) has high damage output, which is often because it has tons of power-ups and in-game items.

Normalin means to execute a normal or basic attack, specifically to strike the enemy with just their physical weapon and sans the use of special skills or magical abilities.

The term derives from the word normal added with suffix -in. In Filipino, this suffix can be used on nouns to create new verb words and therefore convey action.

Normalin! normalin! was also uttered in the same match in which lakad matatag was mentioned and became popular.

Olats is derived from the Tagalog word talo, which means defeat or defeated. A Pinoy gamer who says it is basically yielding, conceding, or admitting defeat.

Pabuhat means someone is a burden to the team, which results to other teammates needing to do so much more to carry the team to victory.

It’s also commonly used to request a teammate to play exceptionally well in order to win the game.

Pa more is a phrase added to a word to indicate that someone is doing something needlessly or badly.

When you want to add sarcasm to your tone, you can add the phrase pa more. For example, if you think a teammate’s solo play habits and lack of cooperation contributed to the team’s loss, you can tell him off with “solo pa more.”

Peenoise is used as a disparaging term to refer to a toxic Filipino gamer. Pretty much a Pinoy gamer with the attitude and characteristics of a stereotypical toxic online gamer, arguably to a greater degree, is considered a peenoise.

If you are labeled a Peenoise, you may have been deemed as a disruptive player that ruins the experience of everyone else in the game by constantly spewing swears. When you don’t see victory in the horizon or when other players fail to give in to your demands, you become inactive and abandon the game. You may also be overly proud of being a Filipino and see other races as inferior.

Peenoise is derived from the informal term pinoy that refers to Filipinos and their culture.

Pugak means to split push, or to split up and push different lanes in order to put pressure on the enemy team, gain map dominance, and keep the enemy on the defensive.

The term may have originated from Joseph Agojo Divinagracia, a former competitive player back in the Warcraft III Dota days. He used the term as his professional nickname and was known for his split-pushing tactics.

A word derived from the slang rapsa, which itself is minted from the word sarap that means delicious. It is used to convey pleasure for getting or achieving something, like killing an enemy player or obtaining a legendary item.

In multiplayer online battle arena (MOBA) games such as Dota 2 and Mobile Legends, the phrase can be a call for all team members to push towards the enemy base to destroy it and win the game.

Taympers means time freeze. One says it to request a timeout or that the game be paused for a while in order to, for instance, take a break and go to the bathroom. The origin of the term goes back to traditional street games.

A Pinoy gamer says “wew”if he is disappointed when, for instance, the game is not progressing the way he expected. Wew is also used to express one’s infuriation, frustration or disbelief. Wew may also be used to mean wow or an expression of surprise.

A popular variation of wew is w3w, where the letter ‘e’ is replaced by the number ‘3’ as if the number were a flipped capital letter E. It is reminiscent of leetspeak.

Filipino gamers are also familiar with gaming terms that are used worldwide and across different multiplayer gaming genres. You may already be familiar with some of them below.

If you have noticed, many of the terms are merely abbreviations. That’s because in multiplayer games, being quick to type messages for cooperation and coordination is important, especially if you don’t have voice communication available.

We’ve already covered amp and peenoise, but toxic Pinoy gamers have more in their arsenal of swear words and insults. Suffice to say, many Pinoy gamers are quite verbal and have earned a bad reputation especially in player-versus-player games.

We won’t bother explaining what the following swears mean. If you encounter someone uttering these profanities, then that person is most likely trash talking and has nothing good to say. You’re better off reporting trash-talking players for abusive communication and muting their chat so you can focus on the game and have fun.

Given the nature and evolution of languages, slang words come and go. Some become popular and become part of the everyday language, while some are forgotten over time. Some are unique to Dota 2, Mobile Legends and other MOBA games, while some are universally used across all multiplayer games.

Did we miss anything? What slang words in the Pinoy gaming world have we forgotten about? Share them in the comments below and we’ll add them to the list.