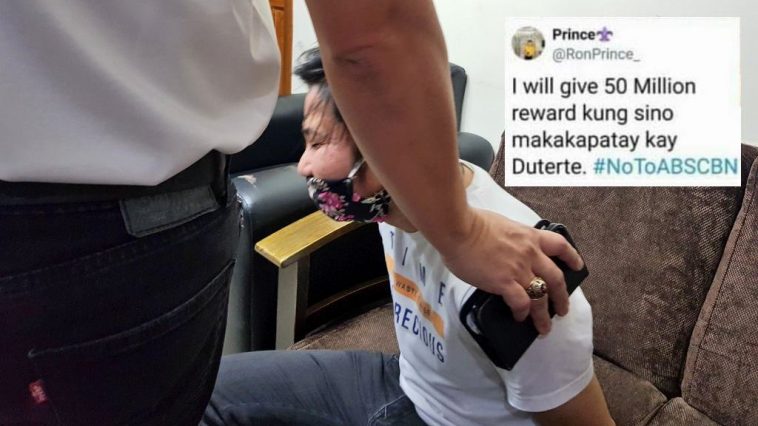 A teacher in Pangasinan who posted a tweet offering a “Php50 million reward” for Duterte’s head was captured by the National Bureau of Investigation (NBI) police.

Originally suspected as a resident of Dagupan City, the NBI searched far and wide in the city, but to find no Ronnel Mas.

Subsequent leads led to the suspect in Sta. Cruz, Zambales where he was caught yesterday, May 11. The Baranggay Poblacion Norte Council helped with the capture of the accused.

The defendant, seemingly fazed and perplexed, initially denied the allegations, feigning innocence. However, the NBI employed reverse psychology to the suspect, subsequently admitting to having posted the threat.

Ronnel Mas was arrested and placed in an envoy for transport to Manila. Alongside him is his parents for company.

Further investigations revealed that the suspect did indeed admitted to the threat a day earlier and was seemingly sleepless the past few days, as per parents.

The parents also confirmed of Ronnel breaking his iPhone 8 Plus on that same day, likely out of frustration or to hide evidence.

Further investigations about the case is underway.