OPPO has officially launched their new smartphone, the OPPO F5. We already have it in our hands for a full review. But before we dig deeper, here our initial thought about the said device.

Right off the batt, I have noticed the OPPO F5’s similarities with the Vivo V7+. The F5 has a tall and sleek profile, thanks to its 6-inch display with an 18:9 aspect ratio. Also, it brags thin bezels on the side — both the top and bottom area are noticeably thin.

The OPPO F5 is also distinctly light. However, pulling down the notifications tab, single-handedly, might be an impossible task — unless you have incredibly large hands. Since the device is unconventionally tall, you have to reach all the way up the reach the top area of the screen. Thankfully, the Control Center is now at the bottom so you can instantly access it with a simple swipe up without breaking a sweat. 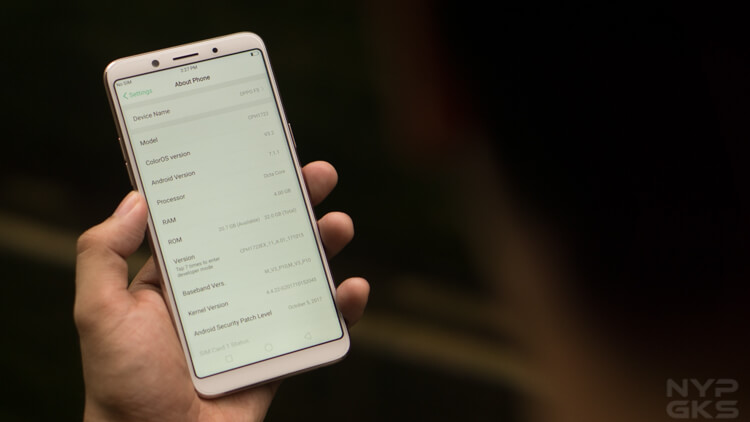 And speaking of “reaching things easily”, OPPO F5’s fingerprint scanner is conveniently situated at the back. Not beside the camera, but it’s in the middle, easy to reach location — just above the OPPO logo, where the index finger usually rests. The fingerprint scanners found on OPPO smartphones are one of the bests out there, so I’m expecting nothing less from this one.

But if you’re way past the fingerprint scanner, or you think it’s just too mainstream. You’re in luck. The OPPO F5 has a facial recognition security feature. Thanks to Apple’s Face ID initiative on the iPhone X, we’d be seeing more and more companies incorporate the said feature in their future devices. 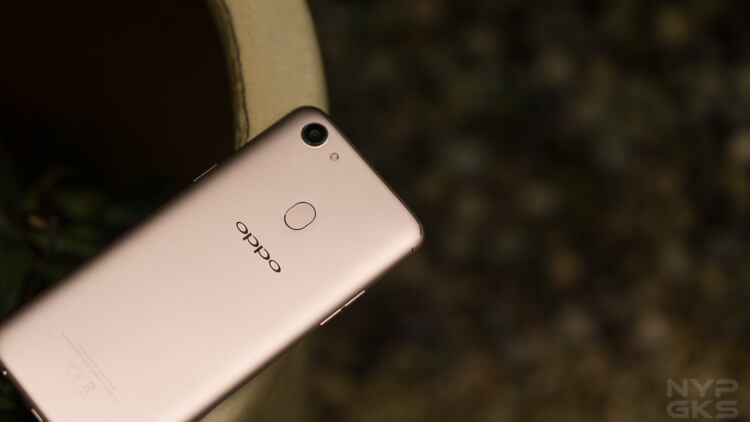 The OPPO F5 might not have an elaborate set of hardware to support facial recognition, but it still worked surprisingly well. Just like the Vivo V7+, the said security feature on the OPPO F5 only uses its front-facing camera. During my initial tests, the handset instantly unlocks just by showing my face to it. However, we still have to look into it a little further to check any vulnerabilities and what not.

And speaking of the camera, this device belongs to OPPO’s selfie-centric smartphone line-up. It might not have a dual-camera setup like the F3 and F3 Plus, but OPPO F5 has some new tricks up its sleeves.

OPPO is introducing an AI-powered face beauty on the F5. Most midrange smartphones today have the Beauty Mode sitting in the camera app. However, OPPO is trying to set the F5 apart by incorporating Artificial Intelligence with it.

I still have to test it thoroughly. But based on my initial tests, I noticed that the beauty effect on this thing isn’t as exaggerated as before. My face didn’t appear pale, blurry, and, in layman’s term, “weird”. It looks like the AI technology analyzed my face in real-time to apply the just-right effect.

At the back, we have the 13-megapixel primary camera. I took a couple of shots with it inside a coffee shop. The images that I came up with looks decent. The colors are good and contrasty.

However, the sensor showed its weakness when I aimed at the windows. Most smartphone cameras at this caliber always have poor dynamic range performance, and the OPPO F5 is no different. The highlights got easily got blown out, and the dark areas could get completely pitch black.

Still, this is just in one location. I still have to take the F5 in different locations and lighting scenarios to further test its camera qualities. We’ll post more camera samples in our review once we fully tested it out.

The OPPO F5 is powered by the new MediaTek MT6763 octa-core processor — a chipset that was announced back in August. So far, it seems like the processor, together with its 4GB of RAM, provides enough horsepower to run the entire system.

Browsing through the interface was fluid. Browsing through Facebook and Instagram feed was also seamless. We’ll just have to see if it can cope up when we run a number of apps and games simultaneously. And lastly, OPPO managed to put up a 3,200mAh battery — which is impressively chunky considering the handset’s thin and sleek profile. During my first day with it, I was still left with 29% before going to bed. That was a full day of browsing the internet via 4G LTE, listening to music via Spotify, and taking random pictures and selfies.

Well, that’s it for now. The OPPO F5 still has to go through our thorough analysis and tests. So stay tuned for our full review for a more detailed look at OPPO’s newest smartphone.

OPPO F5 is priced at Php15,990 and it’s currently available for pre-order. A free wireless bluetooth speaker also await those who get first dibs on the handset.

UPDATE: Read our full review of the OPPO F5 here.