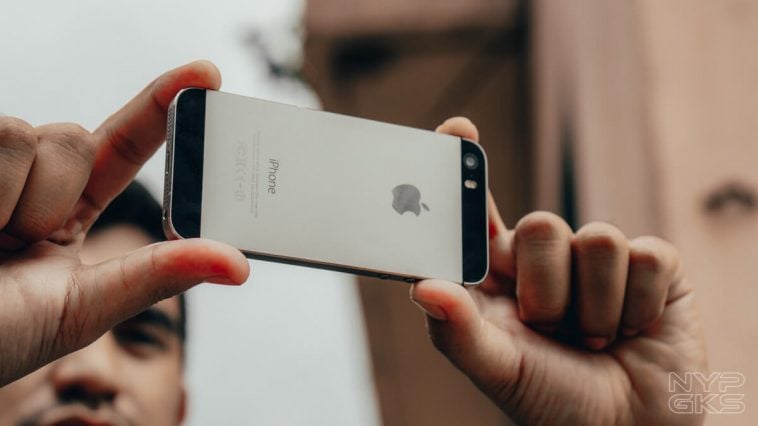 Apple’s iPhone 5S was released back in September 20, 2013. It’s been over 6 years since then, but there are still a lot of people using this iconic phone up to this day.

Now for those who are still considering this phone, here’s what we think of the Apple iPhone 5S in 2020.
Don’t like reading? Check out our iPhone 5S video.

In the past, a 4-inch screen for a smartphone is already considered huge. Nowadays, you can no longer see a phone with a screen size less than 5-inches because it’s the new norm. That’s the reason why some people prefer to stay with this old device, as large phones are too much to handle especially if you have small hands.

The iPhone 5S is arguably the best looking iPhone ever and for good reason. It might not have an edge-to-edge screen or almost no bezels, but there’s something special about it that a lot of people really like. I mean, just look at that. As a bonus, you can comfortably use it with one hand.

Depending on your needs, the 4-inch display is still fine in most cases like casual social media and web browsing. However, it’s a bit lackluster when it comes to media consumption and gaming because of its tiny screen. Watching YouTube and Netflix videos is possible, although it’s not as enjoyable compared to the latest phones right now.

When it comes to performance, the Apple iPhone 5S is a little sluggish and understandably so. Apple’s dual-core 28nm A7 chipset and 1GB RAM combination might be enough back in 2013, but in 2020, it’s a different story.

Don’t get me wrong, it can still run some of the latest apps and games just fine. But there are times when you have to wait for a long while before it loads.The iPhone 5S is still pretty usable, though, and it feels like it can still squeeze in a year or two of usage before it passes out. To see it in action, here’s some sample gameplay for Mobile Legends: Bang Bang and PlayerUnknown’s Battlegrounds mobile. As you can see, while it’s certainly not the most optimal experience, the iPhone 5S can still be used in gaming.

Smartphone cameras have come a long way over the past couple of years, so it’s no surprise that the iPhone 5S is no match to today’s midrange devices in image quality. But if you just need it for social media posts and some selfies, it can still get the job done.

There’s no beautification or Artificial Intelligence (AI) to help you improve your photos, as it only captures what it sees on its lens. Images are not that sharp and contrast is a little lacking.The good news is the camera launches and shoots photos really quickly. Take a look at some camera samples.


Probably the main concern about the iPhone 5S is the lack of iOS 13 support. But that’s to be expected given its age. Apple actually supported this device for more than 5 years and there’s no other smartphone brand that has come close to that.

The good news is iOS 12 is perfectly fine and it’s still being updated with occasional patches and bug fixes. Most apps are still running fine and you won’t have problems in a year or so, for as long as the app or game you’re trying to download can be handled by the 5S. For a perspective, iPad Mini 1 and 2 are now limited when it comes to apps as they are no longer supported.

On the other hand, games like Mobile Legends: Bang Bang and PlayerUnknown’s Battlegrounds are still playable. Although you have to put up with a lot of frame drops and slow downs along the way. Gameplay samples can be seen in our video above. The iPhone 5S is not known for its battery longevity, so it’s expected to only get worse over time. Fortunately, it’s very cheap to have it replaced and you can get it serviced for just $10-$20 (~Php1,000). You can save some money if you install the new battery yourself, but it’s advised to get a professional to prevent any issues.

No, it won’t be able to survive a day of heavy use. But if you have a power bank or cable with you, it’s very easy to top up every once in a while because it has a really tiny battery.


The downside of using this phone is there will be no more updates to its software and some apps will no longer be supported in the future. This also means that things like the improved control center, revamped app store, improvements to Siri, and all future upgrades will be out of your reach. Both iOS 13 and iOS14 will not make its way to the iPhone 5S.

As for the cameras, it’s no longer impressive and it will probably be surpassed by budget Android smartphones in terms of quality in the next few months or so.

If you really want a small phone, you might be better off with an iPhone SE. Or if you can wait a little longer, maybe the upcoming iPhone 9 / iPhone SE 2 might fit your needs. 
You can find a lot of iPhone 5S available online in Facebook Marketplace, Carousell, Shopee, and Lazada. For factory unlocked units, the price ranges for Php3,000 to Php4,000 depending on the condition.

But is it worth it? For me, I would say yes — if you really want an iPhone. I like compact phones and the occasional slow downs doesn’t really bother me that much so I’m okay with that. To top it off, iPhone 5S’ design really has that classic and elegant look.

But if you’re open in trying out Android, there’s a bunch of options available out there that you might want to check out. More often than not, they are the better choice especially if you’re not too attached with Apple’s ecosystem.

Anybody here who still use an Apple iPhone 5S? Are you planning to upgrade soon? Share your experience in the comments section below.