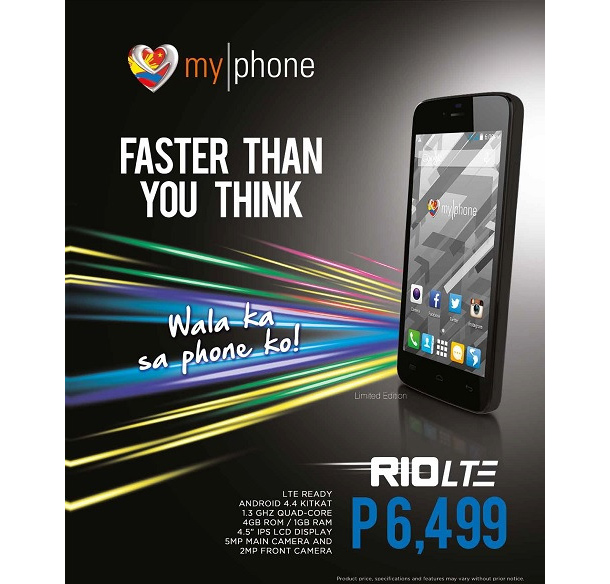 MyPhone’s Agua Rio smartphone lineup has become so successful that it’s once again welcoming a new member to the family. The new MyPhone Rio LTE, as its name implies, is a 4G-ready smartphone for just Php6,499. Android 4.4 KitKat comes preloaded, too!

The boost in connectivity and the updated version of Android may have contributed to the increase in price. On the other hand, many specs of the MyPhone Rio LTE are similar to original Php4,999 Rio, such as the MT6582M processor running under the hood (along with 1GB of RAM and Mali 400 graphics). The front-facing camera has also the same 2-megapixel resolution, while storage options also remain the same.

There seems to be some compromises, though. For one, the rear-facing camera is now pegged as a 5MP shooter (compared to the original Rio’s 8MP). For another, the battery capacity is down by 300mAh. And most notably, the screen has been downsized to just 4.5 inches diagonal, with a lower screen resolution of FWVGA. On the plus side, MyPhone may have some surprises up its sleeve. The local company describes the Rio LTE as “faster than you think.” Our verdict? We’ll let our future review decide on that one.

At Php6,499, the MyPhone Rio LTE is the most expensive in the lineup:

There’s no word on exact date of release, but expect it to be “soon.” Rumor has it that there’s also yet another upcoming variant coming up, called the Rio Junior, so stay tuned for updates.