China had seen a decline in smartphone shipments during the last quarter. But even that’s the case, some of their local breeds are still dominating, with an outsider barely making it at the 5th spot.

According to Canalys, a market analysis firm, China has shown a shrinking number of smartphone shipments for Q3 of 2017. The total figure is now down to 5% from the previous quarter, which totals to 119 million units.

Huawei might have taken the crown, but the competition was really tight. The company is accountable for 19% of total sales, while the second and third best, OPPO and Vivo, came really close to 18% and 17% respectively.

The focus in research and development continues to work for Huawei as they hold their position at the top. 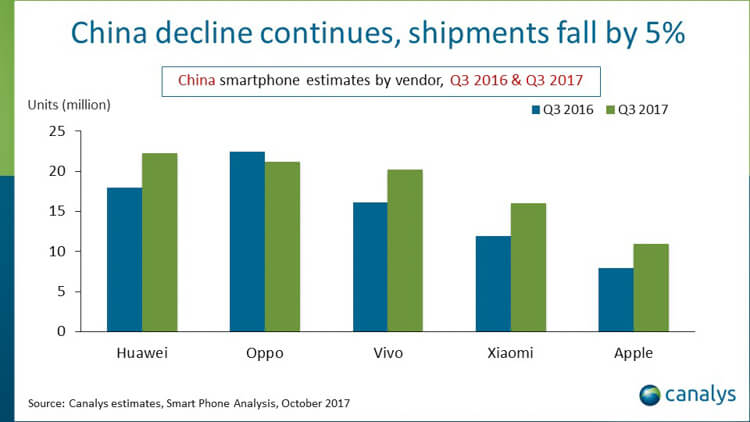 However, Xiaomi, who have taken the top 4 spot, is poised for a rapid take off. The company’s “11.11 online shopping festival” and their further move in selling products in physical stores might be their key to success in Q4.

On the other hand, Apple has finally broken their eight-quarter losing streak in China. The Cupertino-based manufacturer sold 11 million iPhones this quarter. That’s 40% growth from last quarter’s 8 million units. 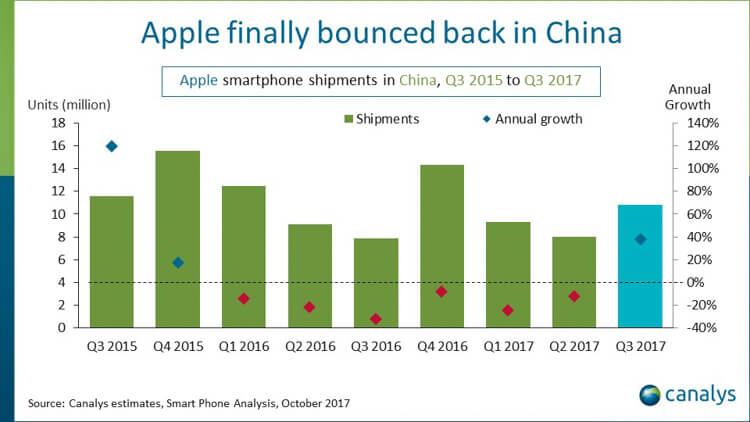 However, as per Canalys’s marketing analyst, this success is going to be temporary. The release of iPhone 8 devices had the older models on price discounts, prompting a lot of consumers to upgrade.

The new iPhone X also appeals to a lot of Chinese people. However, its expensive price and lack of supply might hold the consumers back.

Remember that this is just Q3. The most exciting fight between these manufacturers will be in Q4, where the holiday season commences. And personally, we’re pretty excited about how this figures will turn out when we get the report next year.