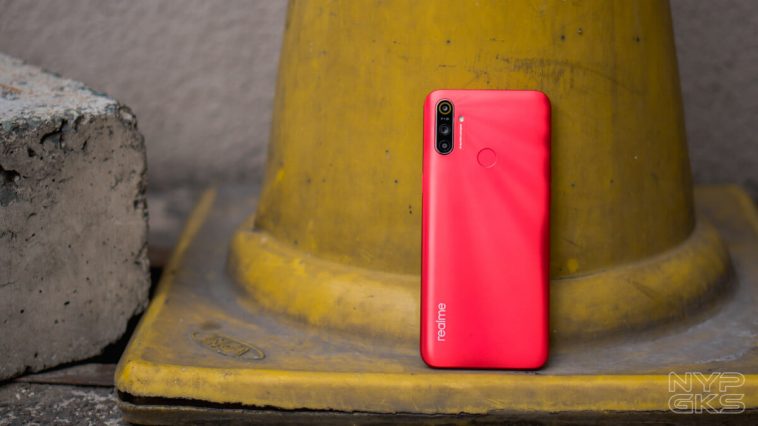 As you probably know by now, the Realme C3 is about to arrive in the Philippines next week.

But before Realme officially launches the device in the Philippines on March 5, we already got our hands on the Realme C3 to share with you our initial thoughts with it.

For a start, we want to reveal that the unit we’re getting here is the one with triple cameras and a fingerprint scanner on the back. That’s the same model that came out in Malaysia, instead of the initial variant that launched in India.

Let’s begin with the design. Right off the bat, you can already tell that the Realme C3 shares the same mold from another budget Realme device — the Realme 5i.

Realme C3 has the same Sunrise color option, with sunray-like reflections that radiate from the triple-cameras on the top left. It compensates for the straightforward textured design that’s a clear departure from the Realme C2 from last year.

It uses an identical anti-fingerprint plastic material of its predecessor, which is nice since the review unit that we have didn’t come with a free protective case.

Just like most low-end smartphones, Realme compensates for the device’s budget nature by putting a large 6.52-inch display on it. In fact, this is even bigger than what the C2 has, which is only 6.1-inches diagonally.

Although, it still comes with an HD+ resolution. So, sharpness is definitely not its strongest suit.

Alongside its bigger display, Realme also amped up the battery to 5,000mAh battery from 4,000mAh. This is also one of the reasons why the Realme C3 feels a bit large and chunky.

To make up for the large battery, the Realme C3 comes with a 10W charger. It may not be the fastest around, but still a welcome addition for a low-end device. On the downside, it still uses a microSD port, instead of the new USB Type-C standard.

The Realme C3 is the first to use the latest MediaTek Helio G70 processor — a gaming chipset made for low-end devices that come with a Mali G52 GPU.

The games that we initially ran was playable. Call of Duty Mobile and Mobile Legends ran at comfortable frame rates. However, the image quality doesn’t look great — probably due to its low-resolution screen.

We’ll detail the processor’s full potential in our full review, so stay tuned for that. In the meantime, you can check the impressive benchmark scores that we were able to get from it.

The Realme C3 is also one of the firsts to sport the new Realme UI with Android 10 OS. It looks clean and straightforward and will help Realme devices to separate themselves from OPPO.

Another big upgrade that the Realme C3 has over the C2 is the cameras. It now has a triple camera setup, led by a 12-megapixel primary shooter with a bright f/1.8 aperture.

We also have a 2-megapixel depth sensor. Plus, a 2-megapixel macro shooter that takes uninspiring photos. If you really want to take close-up shots of small subjects, you might be better off using the 12-megapixel camera and crop it to zoom in.

Sitting in a dewdrop notch on top of the screen is the 5-megapixel selfie camera. As you can imagine, the image quality out of this is really soft — which will look worse when you enable the AI Face Beauty.

Well, that’s it for now. We’ll give our final verdict on the Realme C3 in our full review — which we will conclude once we hear the official price on March 5, 2020.

But so far, we’re really liking the Realme C3. The company definitely has a strong contender here, especially if they decide to place it in the sub-Php6k category.