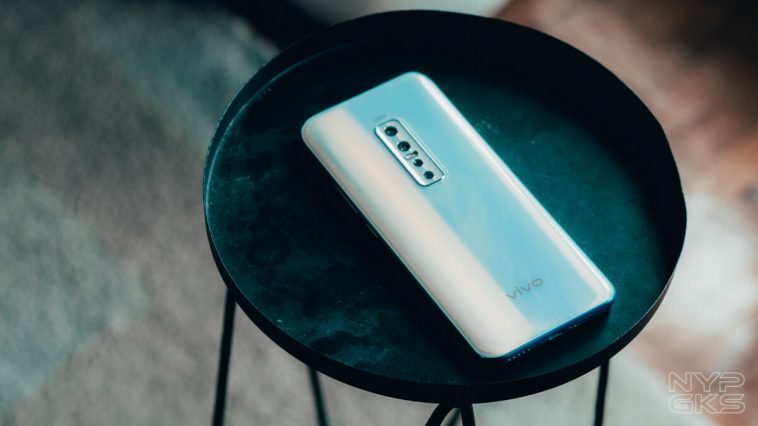 Vivo has always been coming up with clever ideas that make their smartphones interesting. That’s something that we’re seeing here in the Vivo V17 Pro.

Following the footsteps of the V15 Pro, the Vivo V17 Pro features an almost bezel-less screen, pop-up camera, and other unique features that will make people go “wow!”.

Here in our Vivo V17 Pro review, we want to see how all of those features can really benefit you and how it will fit in your needs.

The Vivo V17 Pro will really stand out to the crowd thanks to its unique design. You’d easily separate it from other devices by the distinctive camera placement on the back. They’re in a vertical orientation in the middle, with a very subtle camera bump that’s not too distracting. Everything is sandwiched on this island in the middle. There are the 48-megapixel and 8-megapixel cameras with visibly large lenses on the top, the LED flash on the middle, and the extra two 2-megapixel sensors on the bottom.

It’s sandwiched by Corning Gorilla Glass 6 in front and back. The best part is, it has a clean paint job. The one that we have here is the Crystal White model, with tiny hints of blue and purple. A more subtle Knight Black option is also available. Another highlight of the Vivo V17 Pro is its pop-up camera. The mechanism is wider than what others have, as it houses two front-facing cameras. But thanks to this, it allowed the V17 Pro to have an impressive 91.65% screen-to-body ratio.

The V17 Pro is 9.80mm thick and weighs at 201.8g. It’s clearly not the lightest and most compact devices out there. Actually, you can immediately notice its bulk the moment you hold it. Its bulk might be understandable considering that it houses the motors for the pop-up mechanism. Plus, it’s a no-compromise device as Vivo kept the headphone jack and rigged it with a large 4,100mAh battery.

The said headphone jack is placed on the top, alongside the pop-up camera and a noise-canceling microphone. At the bottom, you can spot the loudspeakers, USB Type-C port, and the SIM tray. Disappointingly, it lacks a microSD card slot for storage expansion. The Vivo V17 Pro might not be the most pocketable smartphone of all. But Vivo’s no-compromise approach on the device makes it forgivable. Although I just don’t understand why they have to leave the microSD card behind. But probably what we liked the most is its size. Having 6.44-inches of screen real-estate makes watching movies and gaming more immersive. Also, thanks to its ultra-thin bezels, the overall footprint is not as large as what 6-inch devices used to be.

Unlike their previous releases, the Vivo V17 Pro now lacks a dedicated Hi-Fi audio chip. With that, the sound quality on this one is not so great. The music coming out of the headphone jack is decent, but not the best. Also, playing music from the loudspeaker sound a bit muffled and lacks clarity. Although it works fine when watching movies or videos.

The Vivo V17 Pro is powered by a Qualcomm Snapdragon 675 octa-core processor, with 8GB of RAM, Adreno 612 GPU, and 128GB of internal storage that’s expandable for up to 256GB. It may not be the most powerful processor for the price, but some corners were needed to be cut to accommodate its other grand features.

But thanks to its roomy 8GB of RAM, the performance in basic and daily tasks was seamless. Flicking through different social media apps, taking pictures, playing videos, and switching between apps is just seamless.

Just like most smartphones, it has a Game Center and an Ultra Game Mode feature. It optimizes the system so it performs at its best when gaming. It may not have the best processor for the price, but it handled all the games we ran on it fine. Call of Duty Mobile, Mobile Legends, and Asphalt 9 ran at high graphics settings with decent frame rates. They’re definitely not the smoothest, but we’ve never experienced any frame drops or lags.

The Vivo V17 Pro runs on Android 9 Pie with Funtouch 9.1. Spoiler alert, the interface actually has tons of useful features. In fact, there’s too much of them that they can be overwhelming. You can minimize it to only show recent apps, toggle buttons, and the brightness and volume slider.

Of course, we have the Dark Mode. Besides giving a more subtle aesthetic look, it’s also easier in the eyes and looks really neat on an AMOLED panel like this. But if you really want to get funky, there are themes available for download on the iTheme app. For those who are worried about bloatware and unnecessary preinstalled apps, the Vivo V17 Pro does come with them. But most of them are uninstallable. The Vivo V17 Pro uses Google Keyboard, which is easy to type on.

Probably the only gripe I had is on the camera app. The toggle on the side that switches from wide and telephoto isn’t the most intuitive. Plus, you have to access a separate button on the bottom of the screen to switch to the ultra-wide camera.

Much like other devices in its caliber, the Vivo V17 Pro also uses an in-display fingerprint scanner. This one is fast, accurate, and reliable. No complaints here. You can even pick between different animation styles and icon patterns. But in case it acts up, there’s also the Assisted Face Unlock feature. Unlike in other devices, this one will only work if the fingerprint scanner failed for three times. Possibly the prolong the life of the pop-up mechanism that houses the front-facing camera.

Besides the biometrics features, this one also has privacy and app encryption, Google Play protect, Find My Device, and file safe box for all your sensitive files.

The Vivo V17 Pro has six cameras all around it. There are four on the back and two on the front in a wide pop-up mechanism.

It starts with the 48-megapixel Sony IMX 582 primary camera with a wide f/1.8 aperture and a quad-bayer color filter. This one outputs bright 12-megapixel images thanks to pixel-binning. You can then enable the full 48-megapixel mode for a more details image.

The images that are coming out on this thing are unsurprisingly good. The colors look vibrant, contrast is deep, and the dynamic range is flexible.

There’s also the 8-megapixel ultra-wide lens with an f/2.2 aperture. The image quality is definitely not the best but still looks really pleasant. The good part is, it gives you great flexibility if you’re shooting in tight places or larger subjects.

Of course, there’s the Night Mode. Unlike the other devices that we’ve tested before, this one doesn’t take the best night photos. Probably a software update can make the images brighter and more colorful.

Also, I wish that it also works on the ultra-wide camera, like what others can.

Now let’s go to the front. There’s a 32-megapixel primary shooter with a Quad-Bayer filter and an 8-megapixel ultra-wide one for group shots.

The primary front camera takes great images. It outputs full 32-megapixel images, so details are really sharp. Both the colors and contrast are also nice. However, the software tends to struggle to get the exposure right, especially in tricky lighting scenarios.

Meanwhile, you really can’t expect too much from the front ultra-wide camera. Other than allowing you to cram a lot of friends in a single group shot, the actual image quality is a bit uninspiring.

Clearly, the flexibility provided by its cameras makes the Vivo V17 Pro one of the most fun smartphones to shoot with.

For a device that’s as premium as this, connectivity shouldn’t be a problem. The Vivo V17 Pro is packed all the antennas you’d need to keep you connected, and they all worked well. It has WiFi 802.11 a/b/g/n/ac with dual-band support for 2.4GHz and 5GHz. We also have Bluetooth 5.0. Both of them worked seamlessly during our testing.

The V17 Pro also has 4G LTE, with no issues on providing a fast and reliable connection to mobile networks. Meanwhile, the call quality is also great with the loud earpiece an a pair of microphones.

Battery life has always been one of the greatest strengths of Vivo smartphones, and we’re having the same sentiments with the Vivo V17 Pro. The 4,100mAh battery lasted for 20hrs and 39mins, with a mix of being in standby, running benchmarks, playing games, and around 12hrs of watching YouTube.

Vivo also included a 22.5W SuperCharge support for the Vivo V17 Pro. That’s slightly faster to the 20W VOOC fast charging that the similarly-priced OPPO Reno 2F has. It charges the device from 0% to 100% at around an hour and a half.

The Vivo V17 Pro is definitely one of the most interesting smartphones out there. It has six cameras, with two of them cradled in a pop-up mechanism. There’s also the all-screen, almost bezel-less display that offers vibrant colors, and has the fingerprint scanner baked right in.

Of course, we have the great battery life that we come to expect on a Vivo smartphone.

However, the Vivo V17 Pro inherits the flaw that its predecessors have. While its processor and overall chipset provided reliable performance, it’s still really underwhelming for the price. Bottomline, the Vivo V17 Pro is equipped with all the flares that can make you go wow. But if you don’t care about the novelties and performance is your top priority, then there are definitely a lot of alternatives out there.

Vivo V17 Pro pricing and availability in the Philippines

The Vivo V17 Pro has a retail price of Php21,999. You can get it in tons of Vivo stores, kiosks, and multi-brand shops nationwide. You can also get it online at Vivo’s official Lazada and Shopee stores.