There’s a new craze in WeChat Games for casual players. With adorable cartoon art and pleasant music, GunZ Dash lets you “dash and chase for happiness with your WeChat friends!”

GunZ Dash is an arcade side-scrolling game that has your character continuously running in pursuit of that evil, vampire-esque villain who abducted a friend of his. While the game prefers the two-dimensional side-scrolling element, this is basically just like the endless runner apps we dearly love to play: Temple Run, Sonic Dash, and Subway Surfers.

Making things interesting in GunZ Dash are its own unique elements. All players begin with Leo, the friendly yet kind-of-narcissistic protagonist, but characters Nikita and Kattie await to be unlocked. Vehicles and pets are also unlockable and come with different bonuses and traits. 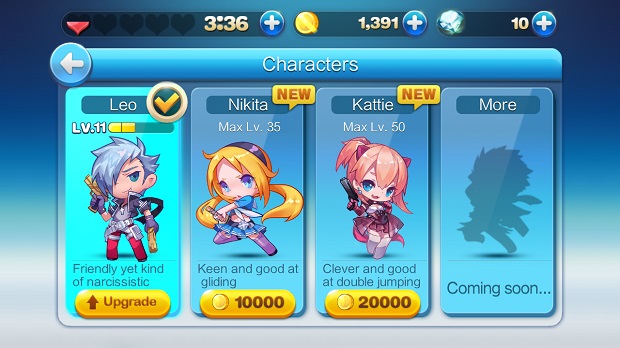 To be honest, I haven’t made any real progress in capturing the crook, nor have I rescued the damsel in distress. Progress is sloooow in GunZ Dash. That being said, collecting coins can be such a drag; one heart/life/session can have you running for several in-game kilometers for several minutes, only to reward you with less than a hundred coins. Many things bought by the coins, on the other hand, costs thousands. So be sure to exploit those bonuses whenever you can: daily logins, surpassing friends in rankings, leveling up your character, and more. 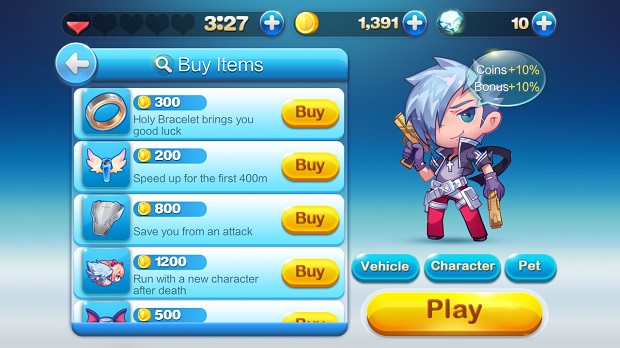 If you’re worried about running out of hearts, try to reach Super Mode twice in one run. Doing so fully replenishes all five hearts. It may be hard at first, but you’ll get the hang of the game soon enough. Alternately, GunZ Dash restocks one heart every ten minutes. Or you can also choose to buy more using diamonds, the game’s other currency.

For other games in WeChat, take a gander at 2Day’s Match and Craz3 Match. All games are available for download in WeChat 5.1.