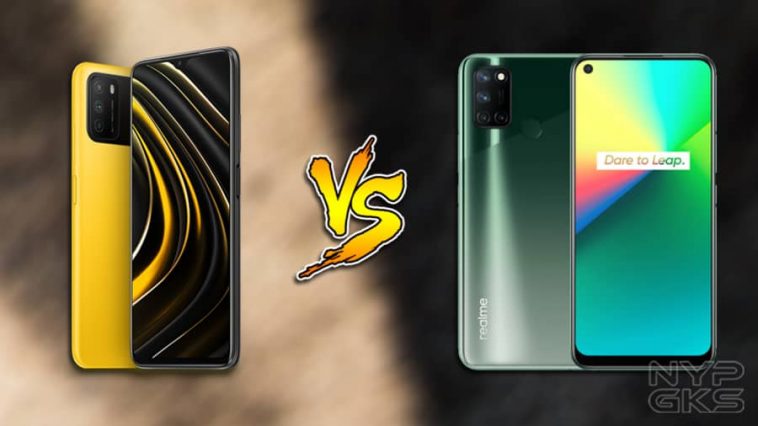 The Qualcomm Snapdragon 662 is one of the latest and most capable mobile chipsets in the market today. Xiaomi and POCO have smartphones that have this CPU, and today, we’ll be comparing the two of them.

First, we have the latest POCO M3. Just like its siblings, this has extra features that make it a viable option for this price.

We’ll be comparing it with the Realme 7i, another compelling smartphone in the budget category.

Besides the processors they share, both devices are equipped with the right features that make them a great workhorse for basic day-to-day tasks, photography, gaming, and more.

So the question is, which between the two is right for you? We find out in our POCO M3 versus Realme 7i specifications and features comparison.

Design preferences differ from people to people, so we’ll leave it up to you to decide. Personally, we like the POCO M3’s design better. It has a relatively new and distinct look.

The M3 has a matte plastic back. Upon looking closely, it has a leather-like finish that you should feel to the touch. Of course, there’s the large backdrop on the top, which transcends the triple rear cameras and the large POCO logo.

On the other hand, the Realme 7i went with a more traditional glass-like plastic look, with geometric patterns. It has a two-tone finish, albeit the shiny surface makes it more prone to fingerprint smudges.

Their built are the same. Being budget smartphones, they both have plastic bodies but with sturdy Gorilla Glass protection on the front.

One of the key highlights of the Realme 7i is its 90Hz refresh rate. However, in our full review, its difference from a regular 60Hz panel is unnoticeable in most cases. What’s worse, it only has an HD+ resolution.

With that, we’d rather go with the POCO M3’s sharper FHD+ pixel resolution and stick with its regular 60Hz refresh rate.

The Xiaomi device also gets a one-up thanks to its stereo speaker setup and Hi-Res audio — something that the competition lacks.

As stated earlier, both devices use the same Qualcomm Snapdragon 660 octa-core processors. Their key difference relies on the RAM and storage configuration.

The Realme 7i comes with an 8GB option, twice the POCO M3 has. However, you have to pay much more for it. And frankly, having that much memory in a budget processor almost doesn’t make sense.

So for this one, we gotta hand the win to the Xiaomi device as it’s just more practical.

The Realme 7i’s higher price tag is justified in the camera department. As you can see, it has a 64-megapixel main camera — sharper than the 48-megapixel that the former has.

It also has an extra sensor with an 8-megapixel ultra-wide lens, while the POCO device settles for the macro and depth sensors.

The M3 also has a 16-megapixel selfie camera, sharper than the 8-megapixel front-facing sensor that the Realme 7i has.

The POCO M3 takes back the win thanks to its bigger battery. Its 6,000mAh capacity shall last longer than the 5,000mAh of the latter.

It also comes with a faster 22.5W fast charger in the box. Although, both only have 18W fast charging support.

Most people shopping for budget phones are in it for practicality. If you’re one of them, the POCO M3 offers the same processor, sharper screen, stereo speakers, larger battery, and faster-charging brick — all for a much lower price.