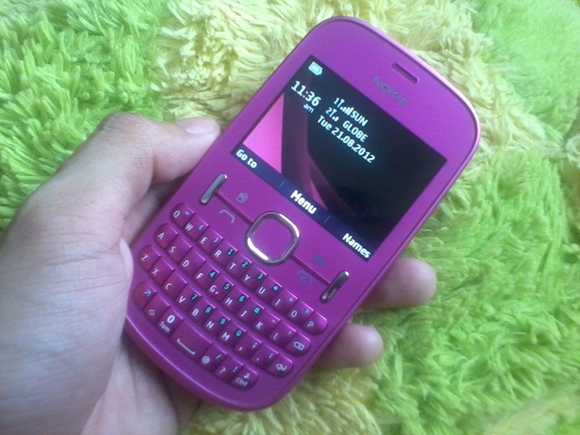 Nokia, one of the top mobile phone manufacturers in the world, once again gave the people a whole lot of options with the addition of the Asha Family to their mobile phone roster. Just when the world was fastly becoming polluted with smartphones, there will always be some casual mobile users who still prefer a simple yet sophisticated device. Nokia Asha 200, the most affordable handset within its group, was released in the last quarter of 2011 and made its way into the Philippines at the start of 2012. Nokia Asha 200 has a simple yet stylish features that will make it stand out among its competitors in the mere P3500 price range. But given the low price tag, it is quite obvious that there will be some limitations in the functionalities. Learn more about the device by reading our Nokia Asha 200 review below.

The package is very basic. It includes the unit itself, charger, earphones, and manuals. There is no USB cable and no memory card on board. Too bad. As we may have all noticed, the Nokia Asha 200 looks pretty much identical to its ancestor, the Nokia C3. They both have a funky QWERTY keypad which encompasses the need of its users in messaging and a fair 2.4 inch screen display to cover it up for virtual purposes. The body is made up of plastic but it is elegant enough to compete head to head to BlackBerry’s design. It gives a nice grip to your hands and shows no signs of slipping. The QWERTY keyboard is also firm and is very convenient to press  while texting. The unit is available in four colors: White, Black, Blue and Pink. Located on the right side is the microSD card slot. Down below, we will see the slot for the Easy Swap SIM feature where you can directly change SIM cards. At the top, it is a little cramped because of the charger, headset, and USB ports are located there altogether. The other side is plain and empty. At the back, the 2MP camera is located just at the right-top corner. The camera present in this handset is the good old camera in Nokia’s earlier S40 releases. The quality is mediocre but is enough to be posted in Social Networking Sites. Check this one sample shot. The once popular operating system of simple mobile phones is still the same despite some enhancements done by Nokia. The User Interface was somehow improved by new icons and some additional options. We should also note the new photo editing app of Nokia. Actually, S40 phones really have a photo editor but this one is new and has a fresh UI and they added a few features. Additionally, they now have the popular threaded messaging bagged in so that users can enjoy the chat style messaging. The EASY Swap SIM feature of the handset is very nice and is customizable according to your needs. You can set which of the two SIMs will be assigned to handle text messaging, calling, and mobile browsing. If you plan to receive messages from the two networks simultaneously, it is also recommend because you can receive notifications from any of the SIM because they are both online. However, you should first choose which SIM to set in a specific task. It is very easy to switch though, because it’s only a few clicks away.

Nokia has their own new browser replacing the old built-in browser we all got used to. The UI is great and looks professional but I’m having difficulties using it so I just installed my favorite mobile browser instead. The phone uses only the slower GPRS/EDGE connection with the absence of 3G and Wi-Fi. Oh, I almost forgot it also has a Social app pre-installed (like Social Hub from Samsung) so you can access your favorite social networking sites at ease and a mail app to attend to your email needs. I tried to log in to Facebook and to my surprise, it has a fantastic and cool UI. Despite the inability to pull off multitasking, it can still provide a good browsing experience. Again, beware that this doesn’t have multitasking.

The Nokia Asha 200 has some good games too and you can download more of them in the web or in the Nokia Store. Although the games are basic and simple, it is still enjoyable just don’t expect HD games to run on this handset.

It’s kinda weird that I included this because smartphones were the ones who have this problem. I don’t know what happened to Nokia because the battery of this mobile phone is freakin poor! It only lasts a day for texting and a few minutes of calls. Actually, it is heavy texting but still it’s quite odd for that to occur considering S40 phones can last about 3 days or more before it fuels out. Maybe the Easy Swap SIM feature is power-hungry.

The Nokia Asha is a pretty decent phone im its class and is highly suitable to everyone even though you’re a kid, a teen, or an oldie who’s looking for their next phone. The Asha 200 is no smartphone but it has all the basic neccessities of a mobile user plus the Dual-SIM capability.

At the price of only Php3,500, it’s one of the best you can get in the mobile market today. Also, don’t expect a good enough smartphone with fair specs at that price, atleast for now.

Nokia came up with a good and solid phone at the affordable price range. So if you’re not that tech savvy, the Nokia Asha 200 is the way to go.