Back in May, we have reported that the iPhone X is the best-selling smartphone for the first quarter of 2018. Now, things have turned around as it has been dethroned by the Samsung Galaxy S9 series.

This information came from Counterpoint Research, who said that Samsung’s flagships have stronger performances in APAC and NAM countries. This is the main reason why both the Samsung Galaxy S9+ and Galaxy S9 got the first and second spot of top-selling smartphones in the world for April 2018.

The iPhone X might have finished third due to the month-on-month decline caused by seasonality. However, Apple was still able to dominate as half of the items on the list are their products. There’s the iPhone X (3rd), iPhone 8 Plus (4th), iPhone 8 (5th), iPhone 6 (7th), and iPhone 7 (9th). 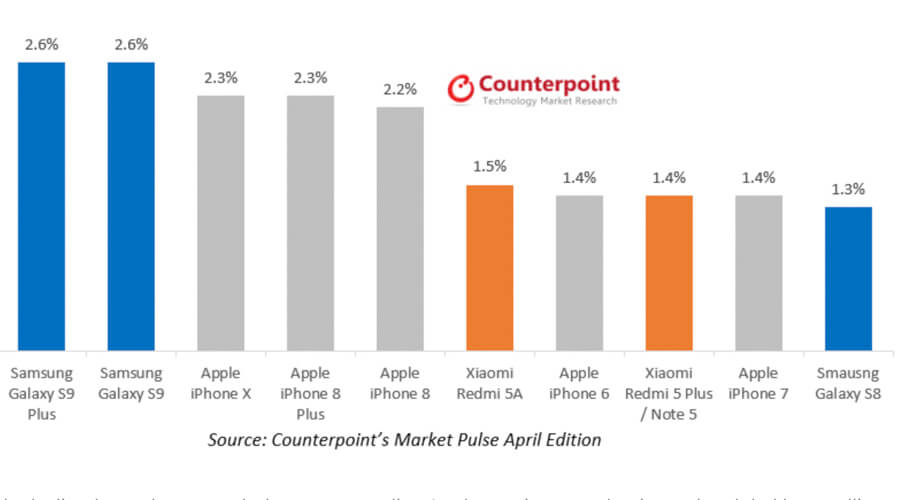 As you can see, some of iPhone’s older models were still able to make it on the list. This is due to the price cuts and better offers that they now have in the market. Another old generation smartphone which was able to make it to the top ten is the Galaxy S8 which occupied the 10th spot.

On the other hand, affordable smartphones were dropped several places from their previous ranking. The Xiaomi Redmi 5A, which was the most sold Android smartphone from the previous list, is now on the 6th spot, while the Xiaomi Redmi 5 Note handles the 8th position.