The OPPO Reno 2F has been in the Philippines for a couple of months now. If you’re still interested in buying one, check out our review.

The OPPO Reno 2F is one of the most beautifully designed midrange smartphones in the market today. At least with this special Nebula Green color variant that we’re reviewing. 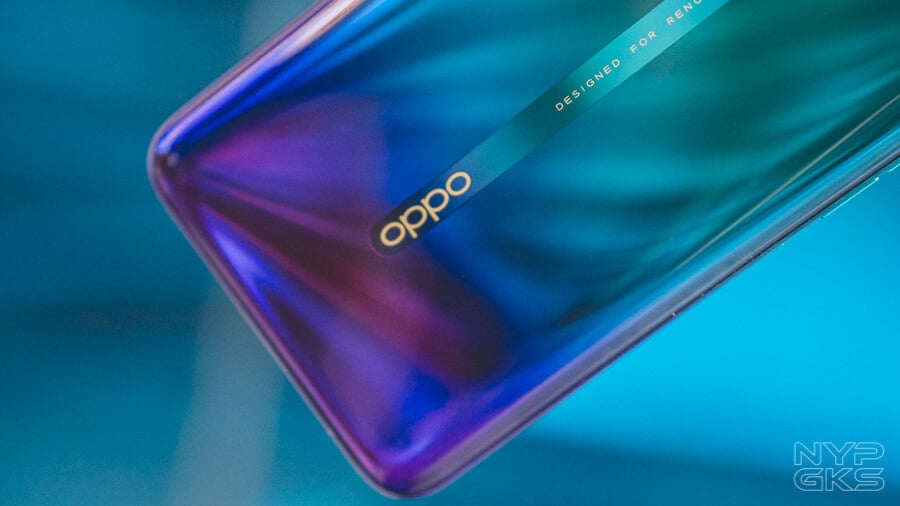 It sports a more aggressive color gradient design, unlike the Lake Green and Sky White models that were initially introduced in the Philippines.

The best part is, the back panel’s shiny surface was made possible by the sturdy Corning Gorilla Glass 5. There’s the strip in the middle with the OPPO logo, adjacent to the cameras on the top. The curved glass makes the device very comfortable to hold, in spite of its relatively heavy 195grams of weight and 8.67mm of thickness. 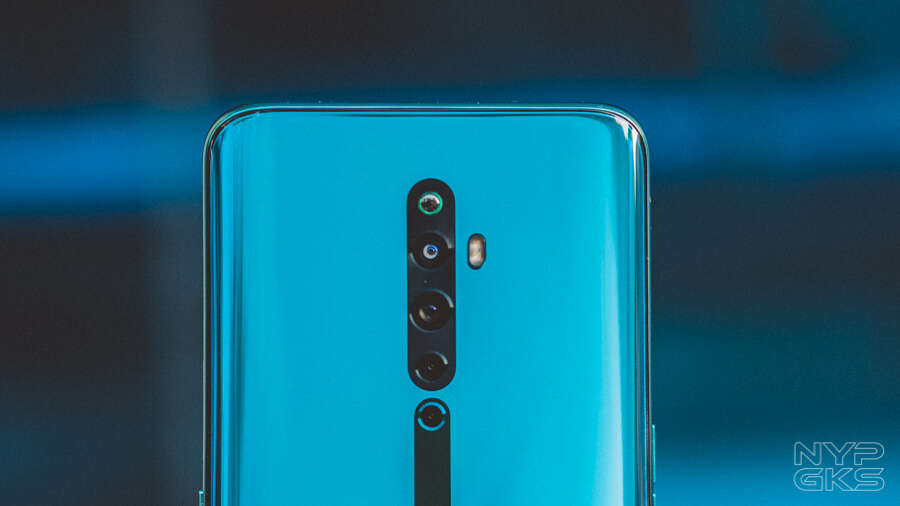 It’s identical to the Reno 2’s design. However, the O-dot — which helps lift up the device when laid flat to protect the camera lens from scratches — is now on top as it switched places with the fourth camera.

I must say, I’m really liking the clean design of the OPPO Reno 2F. We have a large 6.5-inch FHD+ AMOLED screen on the front, with ultra-thin bezels on each corner. It also uses the same Gorilla Glass 5, but OPPO has pre-applied a screen protector for your extra peace of mind. 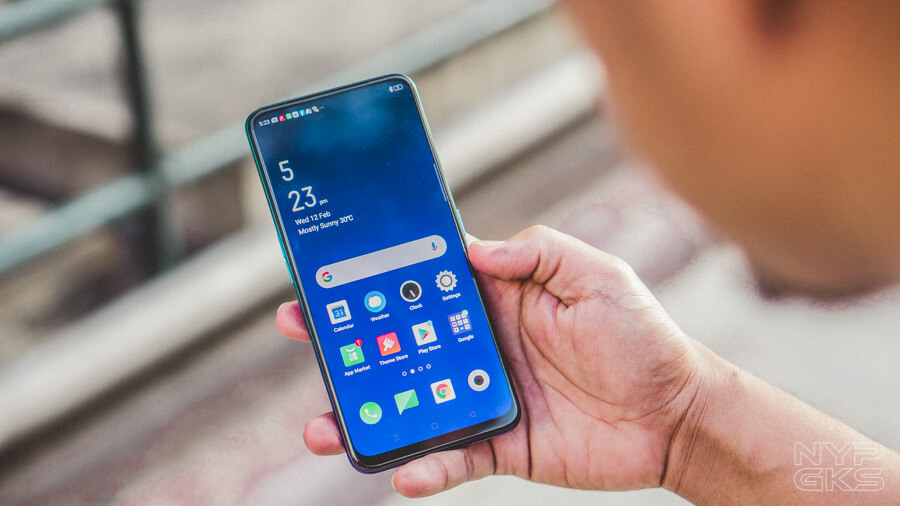 As you can see, there are no notches here. That’s because there’s a pop-up mechanism on the top hides its 16-megapixel selfie camera. This one has the same center-mounted pop-up camera that the F11 Pro has, unlike the pivot-style on the Reno 2. 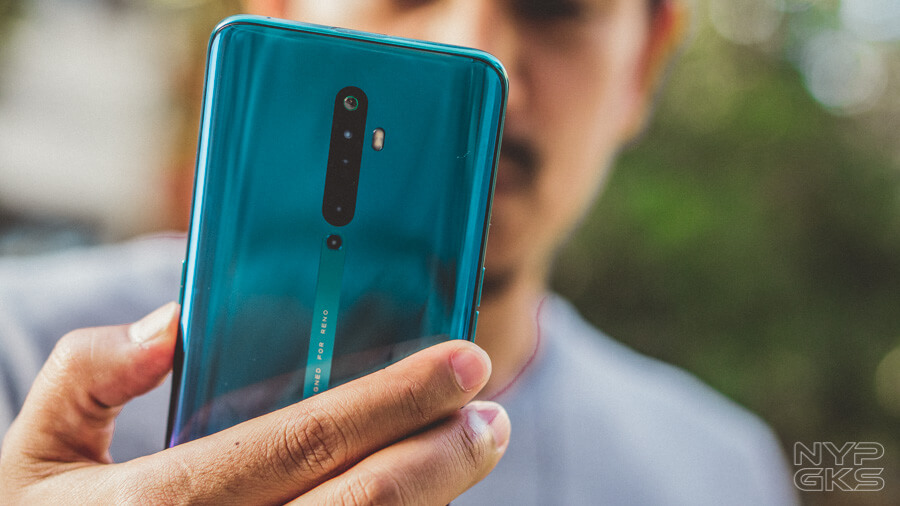 Let’s talk about performance. The OPPO Reno 2F is equipped with a MediaTek Helio P70 octa-core processor, with a Mali-G72 MP3 GPU, a generous 8GB of RAM, and 128GB of expandable storage.

The OPPO Reno 2F can nail all the basic and day-to-day tasks you throw at it. You can browse your social media feeds without a hitch, take a picture in a ‘snap’, and switch between apps seamlessly. This is especially thanks to its huge 8GB of RAM.

You can also game on the OPPO Reno 2F, no doubt about that. Popular games like Mobile Legends and Call of Duty Mobile were playable, although we’ve experienced smoother gameplay on other devices in its price range.

As of writing, the OPPO Reno 2F still runs on Android 9 Pie. However, as per the software update schedule released by OPPO, the Reno 2F will get its Android 10 update this first quarter of 2020. 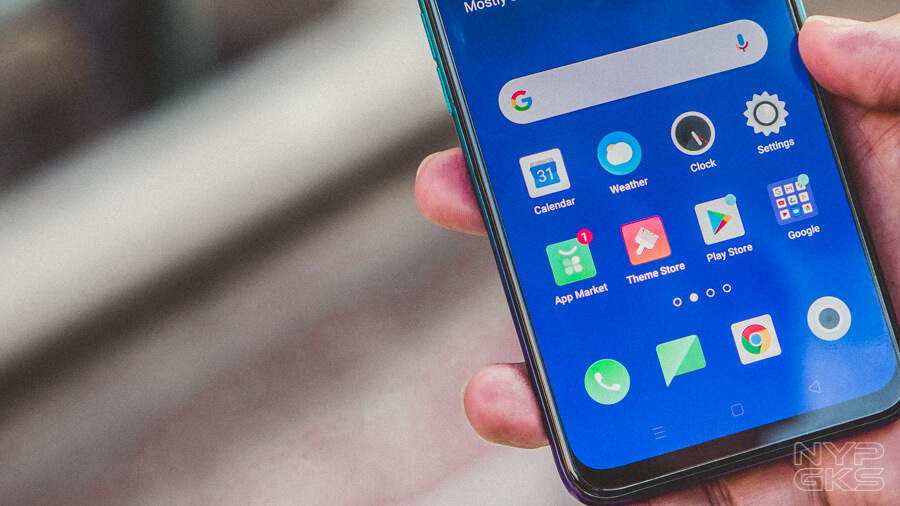 Now, we head on to one of the biggest features of the OPPO Reno 2F — the cameras.  The four lenses on the back consists of a 48-megapixel primary shooter, 8-megapixel ultra-wide, and two 2-megapixel sensors for mono and depth sensing, respectively.

The 48-megapixel primary camera, partnered with AI and other software optimizations, churns out vibrant and Instagram-ready images. It may not as realistic as it should, but we bet most people would appreciate images that pop-out with lively colors.

However, just like most mobile cameras, it does struggle in low-light scenarios. At night or indoors, you might want to use its Night Mode feature. It takes a long-exposure shot, resulting to a brighter, although slightly less detailed night shots.

The results from the 8-megapixel ultra-wide are expected. The details are less pronounced, the colors are just okay, the dynamic range is average, and for some reason, the white balance gets mixed up at times.

Still, we really like the flexibility it provides when shooting large dinner tables, tall buildings, landscapes, and more.

The 16-megapixel selfie camera takes sharp and well-detailed selfies. Although the colors and contrast are usually a hit or miss. Under direct sunlight, it struggles in focusing on the subject.

You can enable the different AI face beauty and filters built-in to have fun with it. But more than the actual image quality, you can also admire the camera as it levitates and lights up every time you try to use it. 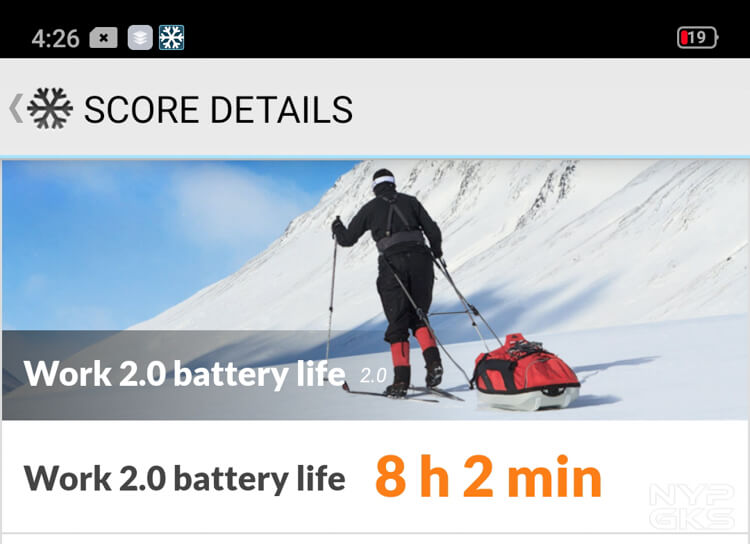 The OPPO Reno 2F has a 4,000mAh battery that offers decent longevity. It got a screen-on time of 8 hours and 2 minutes in PCMark’s battery test. This means that it can easily last you for a day of light to moderate use.

But if you’re a heavy gamer or loves to watch videos a lot, then you might want to reach for its 20W VOOC 3.0 fast charger before the day ends. Which, by the way, can give a full charge in less than two hours. 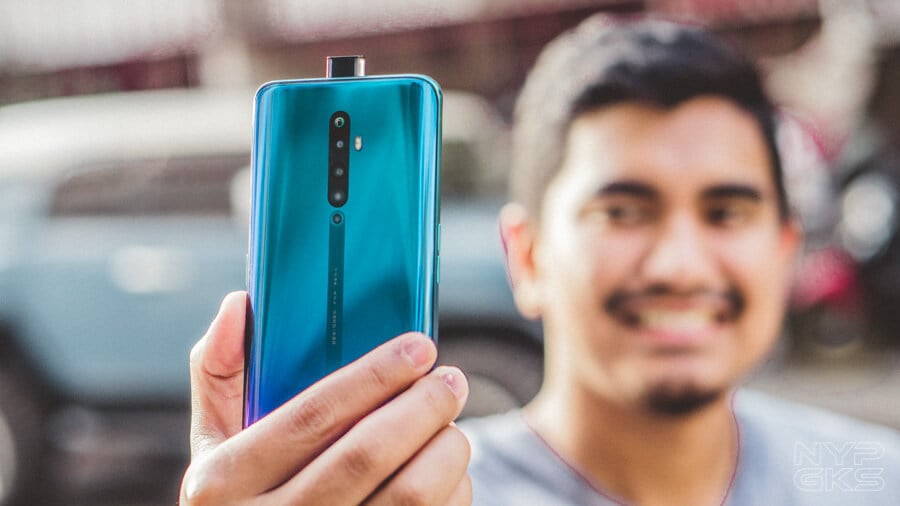 If flashy and head-turner features is what you’re after, then this one can still deliver. There’s the pop-up camera that lights up every time it levitates, an all-screen display with under-display fingerprint scanner, and Dolby Atmos support — features that you can flaunt to almost everybody.

However, despite being Php2,000 cheaper from its original price, there are other devices that are cheaper than its Php17,990 price tag which can provide faster and smoother performance. But if you’re all in on the camera, this handset is one of the best in its category.