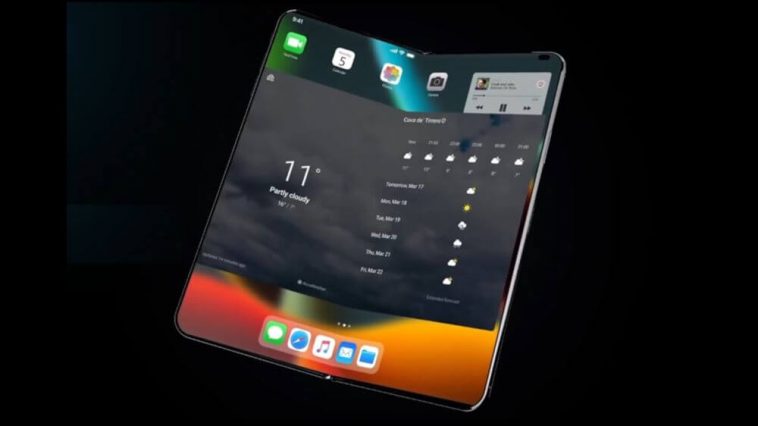 Foldable smartphones seem to be gaining momentum as more OEMs continue to churn out new models. The Samsung Galaxy Fold and Huawei Mate X took the lead last year as the first models. Since then, Motorola has joined the ranks. Both Huawei and Samsung have even released a second foldable model each. Now, US tech company Apple may soon join the trend going by a recent patent awarded to the company by the U.S. Patent and Trademark Office (USPTO).

The patent is titled “Foldable cover and display for an electronic device” and it points to a device that could come in handy in the production of a foldable iPhone. The details of the patent include the presence of a flexible display layer with a covering layer held in place using bonding agents such as glue.

Its description also points to the possibility of three configurations; folded, intermediate, and unfolded. The patent also tips the device to use sensors to either turn off the screen or put it into standby when the phone is folded. Furthermore, the foldable iPhone patent also revealed that the cover sheets lying on top of the flexible screen would be manufactured using glass, sapphire or some ceramic material and could be strengthened by the use of chemicals. The cover sheets would reduce the stress during bending or flexing, thus protecting the display by providing it with structural support.

The display type wasn’t specified instead, it is said that it could be an AMOLED, LCD, E Ink, or OLED. The User Interface (UI) will change depending on the screen in use.

The foldable phone will have hardware crammed inside such as magnetometers, accelerometers, gyroscopes, or other sensing devices that would detect the orientation of the display in order to determine the UI that would be on display. This is similar to what Microsoft is rumoured to have implemented on the Surface Duo. This isn’t the first foldable phone-related patent Apple has got as the company earlier received patents with the same feature. The company had also received a couple of other patents, one of which is a process to warm up a foldable display during cold weather in order to prevent the screen from getting damaged. We recall Huawei had included a warning against using the Mate X in weather conditions below 40 degrees Celcius for the same reason.

We have no idea when Apple will make an entry into the foldable phone category. There were rumours of a launch in 2020 but that has not been backed by any credible source. Apple is likely still studying the market and may jump in to grab a piece of the pie by 2021 if foldable phones become popular.