These have been teased before and scheduled to be officially announced this coming November. Luckily, we’re getting an early look at the next generation of Mediatek processors. MT6592 and MT6588’s complete specifications are now available online.

Mediatek enjoyed enormous success with its dual-core MT6577 and quad-core MT6589 CPUs. These processors were also very popular among our locally branded devices. In fact, last year’s local flagship devices MyPhone A919 Duo and Cherry Mobile Titan W500 rocked MT6577. This 2013, we’ve seen the growth of MT6589 as this was used on widely popular handsets such as Cherry Mobile Omega HD 2.0, MyPhone A919i Duo, and O+ 8.15.

We’ve already heard about the true octa-core processor last July and the first smartphone to sport this powerful chip was spotted last week. However, information regarding this processor was scarce until today’s leak.

Gizchina got a copy of the specs list along with a new quad-core CPU MT6588. Check it out below. 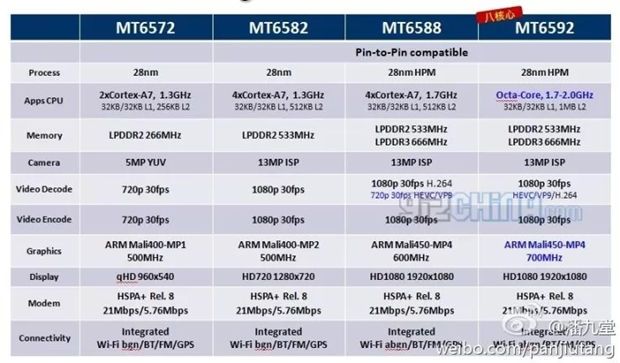 The new MT6588 is now on a 28nm Cortex A7 architecture and speeds of up to 1.7GHz. It’ll be partnered by an increase in graphics performance with the help of Mali450-mp4 GPU clocked at 600MHz. It added support for video codecs VP9 and HEVC. Other than that, the rest is strikingly similar to the MT6589T which includes integrated WiFi, GPS, Bluetooth, FM Radio, HSPA+, 13-megapixel camera, and support for 1080p Full HD displays.

Quad-core processors are still doing well in case you’re a power geek, then you’ll be glad to hear that Mediatek will soon offer the MT6592. It’s also based on a 28nm architecture but it will be available on both 1.7GHz and 2GHz plus 8 freakin’ processors. It will also feature a slightly better Mali450-mp4 GPU clocked at 700MHz.

Octa-core powered android phones will come to the Philippines soon. I’m not sure when though. But based on the current situation, I think it’ll be here in the first quarter of 2014. Not bad, eh?

Are you guys excited?