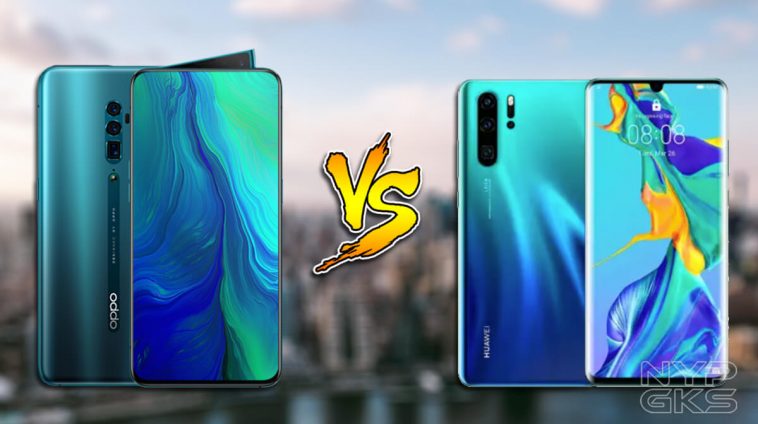 Cameras on smartphones have become more advanced than ever before. Back in the day, the fact that you can take pictures on your mobile device is already cool by itself. Now, brands don’t want you to simply take casual snaps with it but actually produce professional-looking photos.

One of the companies that push photography forward is OPPO. A few years ago, OPPO unveiled the first periscope-style smartphone camera system, which is now finally immortalized with the OPPO Reno 10X. Other than its crazy zoom technology, the Reno 10X also has a killer primary camera, flagship specs, and an attractive design. All of which makes it a proper flagship device for 2019.

But the thing is, the Reno 10X is not alone. If you remember, the Huawei P30 Pro also has a periscope-style telephoto camera, top-caliber specs, and a pretty chic-looking design. Here in our OPPO Reno 10x vs Huawei P30 Pro specs comparison, we ought to see which between these two camera phones is right for you. Both the OPPO Reno 10x and Huawei P30 Pro are really interesting devices. And from what it looks like, they are the most versatile camera smartphones in the market today.

Their telephoto sensors really give the users the flexibility to frame their shots, and take really far away subjects. The Reno 10x might provide farther zooming capability (up to 60X), but the quality from it is worse than the 50x on the P30 Pro. It feels like OPPO just forced it to one-up Huawei in numbers. As per the primary camera, I think that the Huawei P30 Pro wins the fight. It produces cleaner, sharper images in our camera review. Plus, it has unique features like a max ISO of up to 409,600.

Both devices also have an ultra-wide angle lens. But, the 20-megapixel sensor that the P30 Pro uses offers sharper images than the 8-megapixel that the Reno 10X. But, in terms of performance, the Qualcomm Snapdragon 855 on the OPPO Reno 10X shall provide a snappier experience than the Kirin 980 on the Huawei P30 Pro. The battle on the display department ends up in a draw. The Reno 10X has a better 93.1% screen-to-body ratio and a sturdier Corning Gorilla Glass 6. But, the P30 Pro makes up for it by having HDR10 support. It’s also worth noting that the OPPO Reno 10X has a stereo speaker setup, which is great for watching movies or playing games. While the P30 Pro only has a single bottom-firing speaker.

The impressive screen-to-body ratio on the Reno 10X is credited to its unique shark’s fin-style pop-up selfie camera. Meanwhile, the P30 Pro settles for a slightly distracting dewdrop notch on the screen. Moreover, the Huawei P30 Pro takes the win on the battery department. The Huawei P30 Pro has a 4,200mAh battery, which is marginally bigger than the 4,065mAh capacity that the OPPO Reno 10X. It also has a faster 40W SuperCharge support, while OPPO’s bet uses VOOC 3.0 (up to 20W).

Both devices also have an equally attractive design. However, it’s obvious that the P30 Pro has a sleeker build. Plus, it has IP68 water and dust resistance. In conclusion, if camera quality is all you’re about, then the Huawei P30 Pro might be the one you’re looking for. By doing so, you’re also getting a smartphone with water and dust resistance, better battery and charging performance, and HDR support.

But, if an all-arounder flagship device is what you want, then you should really go with the OPPO Reno 10X. This one has a more reliable processor, sturdy screen protection, stereo speakers, and really unique design.

The Huawei P30 Pro is now available in the Philippines for Php50,990. Meanwhile, the OPPO Reno 10X will make its local debut in the coming weeks. And judging by its official SRP in China, it may be more affordable than the competition when it gets here.